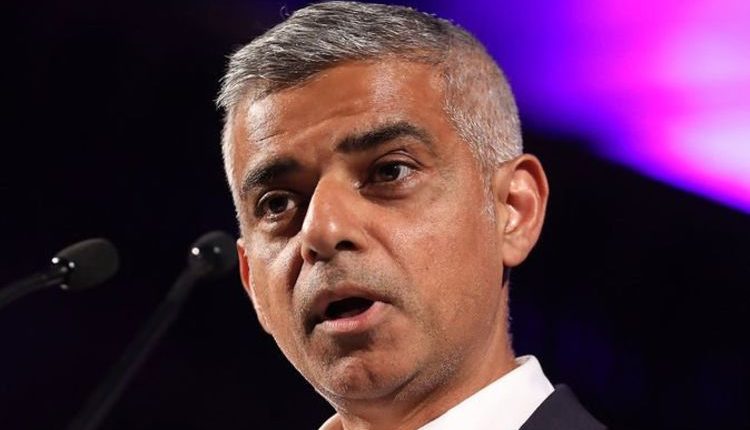 Sadiq Khan calls for ‘much tighter’ controls at UK borders

They include a Star Wars actor and an activist who interrupted a 2007 Westminster Abbey service attended by the Queen. The commission, which was set up following last summer’s Black Lives Matter protest, will investigate statues that come from a “bygone era”.

However Mr Khan’s office insisted the panel was not created to “preside over the removal of statues” but rather to add “best practice” guidelines to “enrich and add to the current public realm”.

Shaun Bailey, the Conservative candidate for this year’s London mayoral election, described the group as a collection of “unelected activists”.

The commission includes Toyin Agbetu, a social rights activist who interrupted a 2007 service at Westminster Abbey held to mark the 200th anniversary of Britain’s Abolition of the Slave Trade Act.

Making it to within meters of the Queen he shouted: “You should be ashamed. We should not be here.

Sadiq Khan has organised a review of London statues and monuments (Image: GETTY)

“This is an insult to us. I want all the Christians who are Africans to walk out of here with me!”

Mr Agbetu was detained by security guards and removed from the building.

He later justified his actions in an article for The Guardian newspaper.

The activist wrote: “I went to the Queen and said that in the history of the Maafa [black genocide], the British are the Nazis.

READ MORE: Sadiq Khan promised so much but has FAILED our capital city – COMMENT

“But where the Germans had the humanity and humility to apologise and make reparations for the Holocaust she, in not doing so, shames not only herself but her nation.”

Also on the panel is Lynette Nabbosa, an activist who asserted it was “the UK’s racism that birthed slavery and colonialism” and Star Wars actor Riz Ahmed.

Racial justice protests erupted around the world following the death of George Floyd, a black man, in Minneapolis last May at the hands of police.

This sparked huge racial justice protests in the United States which spread across the western world.

A statue of Edward Colson was torn down in Bristol (Image: GETTY)

Some of the anger focused on monuments protestors claimed had racist or imperialist implications and a number were attacked.

In the United States confederate war monuments were pulled down along with a statue of George Washington, a slave owner.

Similarly in the UK protestors in Bristol toppled a statue of Edward Colson, a merchant involved with the slave trade, and threw it into the sea.

A statue of Sir Winston Churchill in London’s Parliament Square was graffitied by demonstrators.

Sadiq Khan: Too many Londoners hesitant about vaccine

Speaking to the Daily Telegraph Oxford academic professor Nigel Biggar warned the commission fails to represent both sides of the argument.

He said: “The historical assumptions of the ‘decolonisation’ movement are very largely wrong.

“The ‘decolonisation’ of public statuary, therefore, amounts to the public triumph of a false historical narrative. To say that the truth of the narrative that prevails in public does not matter.

“And to compose a panel without any politically conservative historians is both illiberal and lets the false ‘decolonising’ assumptions go unchallenged.”

These sentiments were shared by Dr Zareer Masani, a historian, who warned of a “conspicuous absence of either British or imperial historians, who might put our statues in context”.

Mr Khan’s office said the Mayor “wants to tell the full story of the capital and to commemorate those from every community who have made London what it is”.