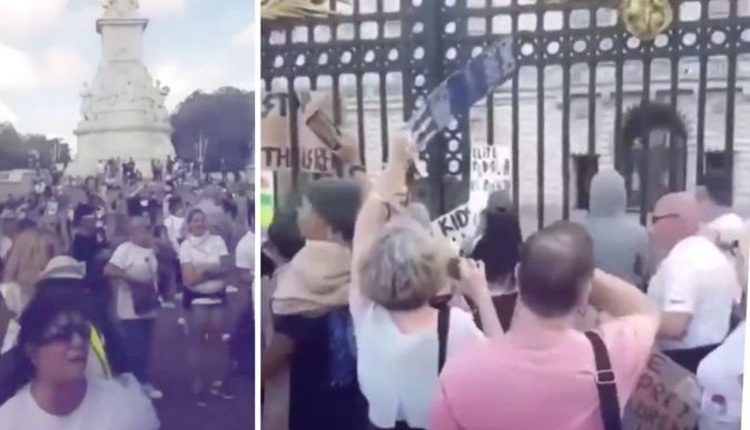 The footage is from a ‘Freedom For The Children Global Walk London’ protest that took place in London on Saturday. The footage has been viewed by more than three million people since it was posted on Twitter.

The protest reportedly started at 1.30pm on August 22 and involved the protesters marching to Parliament Square as well as Buckingham Palace.

Similar protests have been held in Liverpool and Manchester.

Protesters were encouraged to wear white t-shirts to the march.

‘Freedom For The Children Global Walk London’ took to Facebook to explain more regarding the protest.

The Facebook post said: “The purpose of this walk for change is to bring awareness to the current reality of child exploitation within our own communities and around the world.

“Let’s show our devotion and determination toward protecting these children, our communities most vulnerable, by requesting change and reformation within our government and law enforcement agencies to ensure that justice is brought in such a manner that it will significantly reduce instances of child exploitation while promoting awareness in order to end this ongoing issue.”

One protester wrote on Twitter: “I was there. It was a peaceful walk followed by a group meditation starting at the London Eye on to the Palace then to Downing Street.

“Organised by ‘Freedom For The Children’ FB group for #EndChildTrafficking We had full police support.”

In the footage, some of the protestors appear to be waving banners emblazoned with Queen Elizabeth II’s son, Prince Andrew.

Some of the placards appear to condemn the Duke of York for his relationship with deceased paedophile Jeffrey Epstein.

Despite public anger over his friendship with the disgraced billionaire, Prince Andrew strenuously denies any wrongdoing.

Prince Andrew has continuously denied any involvement with the “abhorrent” activities of Epstein through several statements from the Palace.

Mr Epstein was arrested in July 2019 on federal sex trafficking and conspiracy charges related to the alleged abuse of hundreds of girls before.

Prince Andrew earlier this year claimed he had offered his support and help to US authorities.

The Duke of York underwent a 50-minute exchange with Ms Maitlis in which he answered a series of questions on his relationship with the disgraced billionaire.

The programme sparked widespread public backlash both in the UK and abroad, and ultimately led to Andrew temporarily resigning from his public duties in November 2019.

The Duke, who is the Queen’s third child, has “categorically” denied having any sexual contact with any of the women associated with Epstein.

The Prince also said he does not regret his friendship with Epstein because of “the opportunities I was given to learn” from him about trade and business.

He has also rejected the notion of him as “the party Prince” and said “going to Jeffrey’s was not about partying, absolutely not”.