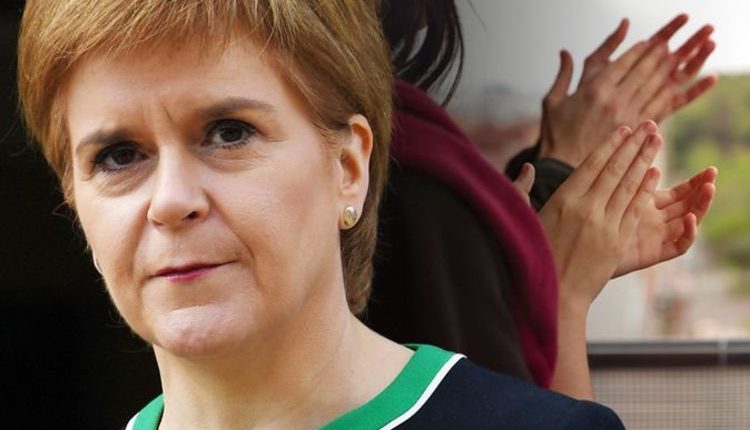 Supporters of First Minister Nicola Sturgeon are calling for people to clap between 6pm and 6.10pm tonight in tribute to the Scottish National Party leader for how she has handled the coronavirus crisis and “for not being bullied by Westminster”. But critics of Ms Sturgeon have reacted in outrage, saying the SNP’s management of the COVID-19 crisis has been “shambles” and said they would not be joining the clap.

Ms Sturgeon’s government has accused of a coronavirus “cover up” after its decision not reveal the identity of Scottish people who may have contracted coronavirus at a Nike conference at the beginning of the pandemic.

Pressure is also mounting on the SNP leader after she was accused of failing care home residents and staff when it emerged 43 per cent of Scottish coronavirus deaths are linked to care homes, compared to around a quarter in England and Wales.

Furious Twitter users took to the social media site to express their disgust at the plans for ‘Clap for Nic’.

One said: “The unwavering support for Nicola Sturgeon is incredible. Scotland has the most Covid19 deaths per million people of any region or country in the United Kingdom and the SNPs management of the crisis is a shambles.”

Another said: “I’ll clap. Clap for the 2000 deaths she could and should have prevented. Clap for the elderly that her policies in health and social care have killed in hospitals and care home.

“Clap for those she failed to tell about the Nike outbreak Clap for Sturgeon? Not a fucking chance.”

A Twitter user posted: “Brilliant idea. Will let me know which neighbours to avoid and to never take Amazon parcels in for.”

Another said: “Be good if there’s a clap for Sturgeon, then I’ll know what neighbours are off the Christmas card list.”

Mr Begg said: “I want people to take part and do it to say thank you to Nicola for the way she has handled the outbreak and as a thank you for not being bullied by Westminster.

“She’s doing what she thinks is best for Scotland. She’s doing a good job.

“I think she needs recognition and appreciation for what she’s done. She’s looked at all of the advice and doing what she can.

“There has been an amazing response so far – it’s been incredible.

“People can clap for a few minutes or 30 seconds or whatever they want.”

Earlier this week, Ms Sturgeon set out her route map to take Scotland out of lockdown.

Public health is a devolved responsibility so administrations in Scotland, Wales and Northern Ireland can choose different policies to Boris Johnson’s Government.

The nature of the lockdown restrictions has been broadly similar since March 23 but differences have started to become clear this month.

She outlined a four-phase path out of the lockdown, with the first beginning on May 28.

From that point, Scots will be able to meet people from one other household outside and while social distancing.

Non-contact outdoor sports will be allowed to return, such as such as golf, tennis, bowls and fishing, as will sitting in parks and sunbathing.

Recreational trips “broadly within five miles” are permitted but these should be done by walking or cycling wherever possible.

Outdoor businesses and garden centres will resume from May 28 and schools are due to go back from August 11.