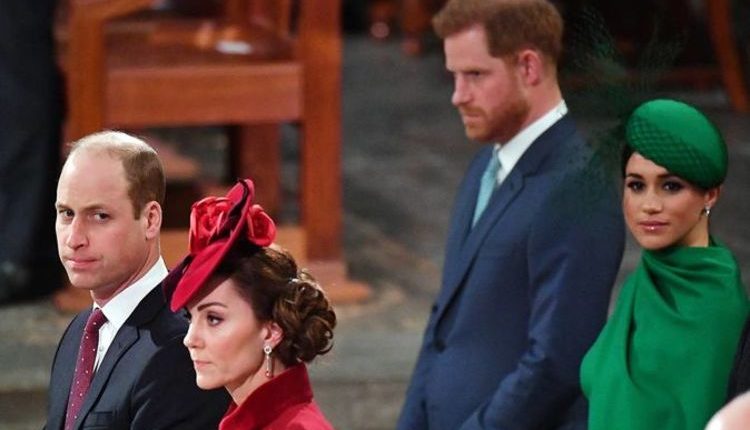 The current global lockdown has meant that the Cambridges and the Sussexes are self-isolating thousands of miles apart. Meghan and Harry recently celebrated their son Archie’s first birthday in their Malibu rented mansion, while Kate and William remained at Anmer Hall in Norfolk. On Archie’s birthday, it is thought that the Sussexes spoilt their only son with a handmade cake, decorations and balloons.

However, there has been no mention of whether Archie got to see his auntie and uncle online on the big day.

However the fact the world did not hear about the video chat might mean there could have been a breakdown in their “communications”, as Harry has often elected to share Zoom chats with selected media outlets.

Ms Carroll added that if there had been a conversation between the two families, we “might have heard about it”.

She added: “This frost between the brothers has gone on for quite some time; so I have my doubts that they have spoken during the lockdown, which is sad.

“I don’t know what it would take for the breach to heal.”

Lately, there have been numerous rumours that the two couples have completely fallen out following the Sussexes’s bombshell revelation that they wanted to step down as senior royals without discussing it with the family first.

Meghan, 37, is understood to have insisted on “the very best” for her big day, but the fitting did not go according to her demands

However the source of the tension between the two sister in laws actually stems from Prince William and Prince Harry who began the divide.

Royal author Katie Nicholl said: “William was quite concerned that the relationship had moved so quickly.”

She continued: “I think what was meant as well-intended brotherly advice just riled Harry. Harry is hugely protective of Meghan.

“He saw that as criticism. He interpreted that as his brother not really being behind this marriage, this union, and I don’t think things have been quite right ever since.”

Another person who agreed with that statement is royal family expert Nick Mullen who has made programmes about the royal family for almost 20 years.

He claimed: “It’s actually that William and Harry have had a rift.

“All brothers fall out. All families fall out. Their fallout at the moment is becoming public.”

Mr Mullen also said that Prince Charles and the Queen are “working incredibly hard to try and make sure everybody reunites”.

Côte at Home – Bring the Restaurant to You!