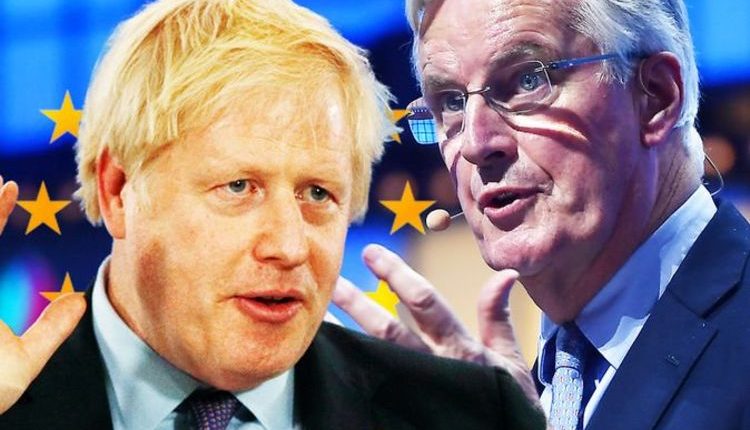 Currently, Michel Barnier and David Frost are discussing a way forward so that both the UK and the EU can benefit from a trade deal after the transition period. The current standoff has centred around regulatory alignment and fisheries. During the referendum campaign in 2016, leavers such as Prime Minister Boris Johnson vowed that the UK will be free from EU regulation and will take full control of its fishing grounds. While the PM wants a trade deal, the EU’s negotiator – Michel Barnier – has told the UK it must accept a “level playing field” and leaves its fishing grounds open if it is to keep access to European markets.

But, as Tory MP Andrew Bridgen reveals, the Prime Minister sent a warning to Brussels which helped get his withdrawal deal through.

Mr Bridgen, the MP for North West Leicestershire, claims that the fact the UK was holding a general election in December also helped secure concessions from the EU.

He continued: “They knew we would have a general election, I personally told the Dutch embassy ‘we are having an election, we are going to win, and if you open the withdrawal agreement, we will have a transition period in our manifesto’.

“But I warned ‘if you don’t reopen the withdrawal agreement, we will have an election, and in our manifesto it will say we are leaving with no transition – so make your mind up’.

“You can face the EU down, and if Boris didn’t give into the EU when we didn’t have a majority, what makes them think we will now that we have?

“We want a free trade agreement, but if not we will do deals with people who want to do a deal with us.”

Mr Bridgen also told Express.co.uk that Theresa May’s lacklustre strategy may still be having an impact on talks now.

He added: “The fact is the EU has been spoiled during the negotiations for the withdrawal agreement by Theresa May.

“Now they have David Frost to deal with, who is consistent.”

On October 19, 2019, the Government tried to hold a meaningful vote on the deal Boris Johnson renegotiated with the EU.

However, MPs passed an amendment from Oliver Letwin which made clear that MPs would withhold their approval of the Withdrawal Agreement until its bill had been passed.

As a result, the Prime Minister wrote to Donald Tusk requesting an extension until January 31, 2020.

Mr Bridgen believes that even if there was an extension, the UK would gain nothing.

He added: “We extended and extended, but what did that get us? Nothing.

“You can understand why the EU, thinking every time they’ve given us a deadline we’ve extended under Theresa May, you can’t blame them for trying with Johnson.”

Dinner and a Movie: ‘Paterson’ and a cheese pie | Movie News