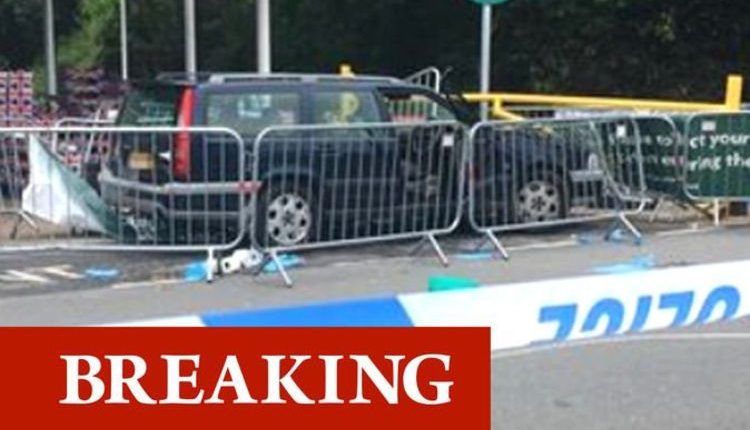 The people were waiting in a socially distanced line outside the store in Totnes Road, Paignton, when they were hit. Morrisons staff members rushed outside after the car careered into the customers. Police rushed to the scene of the smash and a cordon remains in place.

Witnesses told Devon Live they saw one shopper thrown over the car as it veered into the queue.

They said the person suffered broken arm in the incident and thankfully was not seriously injured.

Three ambulances and one ambulance car rushed to the scene of the smash shortly after noon.

Five people were taken to hospital for treatment.

None of the eight people who have reported injuries are thought to be in a serious condition.

Reports suggest the driver of the car – an elderly woman – suffered a “medical episode” while behind the wheel.

A spokesperson for Devon and Cornwall Police said the female driver injured her leg in the crash.

The force said: “Police were called to Totnes Road, Paignton, at around 12.05pm today with a report that a car collided with a barrier at the entrance to Morrisons supermarket which in turn hit several members of the public who were waiting in the queue.

“The driver of the vehicle sustained an injury to her leg and up to eight pedestrians, have reportedly sustained injuries.

“The extent of injuries are still being assessed but at this time it appears that none are serious or life-threatening.”

Photos of the scene of the crash show a sign tied to metal barriers which reads “Please queue here”.

A dark blue Volvo V70 looks to have smashed into the barriers close to the main entrance to the store.

Shocked witnesses took to social media to warn others about the collision.

One man wrote: “Pedestrian collision at Paignton Morrisons happened right in front of me.”

Here’s your first look at the PlayStation 5 hardware design