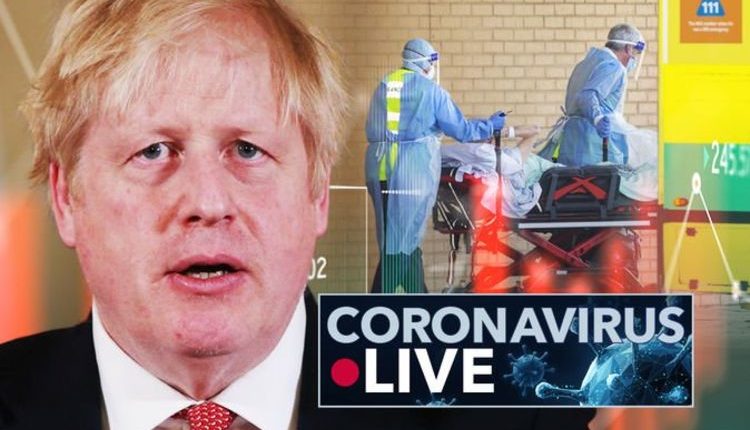 England reported 181 new hospital deaths, Scotland had 41, Wales recorded 18 and Northern Ireland had four. The daily hospital increase of 244 is down slightly from 256 on Friday. However, it is thought that the true death toll – including fatalities in places such as care homes and private homes – is higher than 40,000, according to the latest official figures.

This is the first weekend since Covid-19 lockdowns in England and Wales were partially eased, and the latest death figures came as people living in or near beauty spots urged day-trippers to stay away.

Changes in the coronavirus regulations mean people in England can now lawfully travel long distances to exercise and enjoy the fresh air.

But there are fears popular tourist spots such as the Lake District and the beaches of Dorset, Devon and Cornwall will be inundated with visitors.

And with the police not having the power to enforce social distancing, angry locals might take the law into their own hands.

In the north-east, an area with one of the highest infection rates in the country, police issued a warning after finding nail traps in Guisborough Woods, a popular spot for walkers.

Similar traps, made of drawing pins, were found on paths near Bournemouth in Dorset and Martyn Underhill, the local police and crime commissioner, admitted he was worried about the weekend.

1.00am update: Explosive study says virus did NOT originate in Wuhan market

AN EXPLOSIVE new scientific study has challenged claims by Chinese authorities that the source of the coronavirus pandemic was the animal market in Wuhan.

Analysis of all available data by specialist biologists show clearly that the deadly virus was taken into the market by someone who was already infected with COVID-19.

For more on this story:  /news/world/1283280/china-coronavirus-news-covid-19-beijing-wuhan-market-latest-scientific-research-Harvard

The Government is to invest £93 million to bring forward the opening of a new vaccine-manufacturing centre ready to begin production if a coronavirus vaccine is found.

The Department for Business, Energy and Industrial Strategy (Beis) said the Vaccines Manufacturing and Innovation Centre (VMIC) will now open in summer 2021 – 12 months earlier than planned.

The protesters said they objected to their rights of free speech and movement being curtailed by the regulations introduced to control coronavirus. One group chanted “no 5G” and “no vaccines”.

7.50 pm update: Football is back, with the resumption of Germany’s Bundesliga, after a nine-week absence.

But instead of being mobbed by jubilant team-mates, he made sure they all kept their distance as he performed a little dance on the sidelines, in homage to the strict hygiene rules that the league has to follow.

Six matches have been taking place on Saturday, with every shout by players or coaches audible, and social distancing protocol followed by substitutes.

6.50pm update: Testing extended to all care home staff and residents in Wales

Coronavirus testing will be extended to all care home residents and staff in Wales, the Welsh government has announced.

The Welsh government had faced criticism for not testing everyone in care homes.

Initially, it had opted only to test individuals with symptoms, and then increased testing to larger homes with no signs of the virus on 6 May.

Italy’s coronavirus death toll has risen to 31,763, as a further 153 deaths were reported, its lowest 24-hour increase in deaths since 9 March.

Lombardy, the region most severely affected by coronavirus, registered 39 deaths, down from 115 on Friday

This is to help families struggling because of the pandemic.

Mr Williamson said the government recognises “the important role education plays in pupils’ lives”, adding that it benefits them “not just educationally, but physically and emotionally” as well.

Mr Williamson said the government will work with local authorities and unions, as well as the medical profession and SAGE.

His comments were reinforced by Dr Jenny Harries who said: “Children definitely don’t get as ill with coronavirus.

She speculated that for younger children “there may be some evidence that they are less likely to pass it on”.

She said, “crude data” suggests there is a relatively low incidence of coronavirus among teachers compared to other public-facing professions.

She added: “Parents and teachers should not be thinking that every school is likely to be swarming with cases.”

4.50 pm update: Gavin Williamson has said, “Schools will only return if five tests are met”

Mr Williamson said the Government will look at the R rate in “great detail” and schools will only return if five tests have been met.

Mr Williamson said the UK is moving towards “allowing people to resuming their way of life” .

This means the UK is moving from level 4 to level 3 in the new alert system devised by the government.

He added: “Thanks to the hard work and sacrifices of the British people we have helped to bring the R number down.”

Health professionals were also concerned about the accuracy of some test results, he said.

The government said “95 percent of tests” were processed “in less than 48 hours”, but this is not happening.

NHS England has announced 181 new deaths of people who tested positive for Covid-19, bringing the total number of confirmed reported deaths in hospitals in England to 24,527.

The figures also show 23 of the new deaths took place between May 3 and May 12, while the remaining eight deaths occurred in April with the earliest death on April 4.

The country’s biggest primary school chains plan to reopen their classrooms to pupils at the start of next month despite opposition from teaching unions.

The heads of Reach 2, Harris, Oasis and GEP said they are backing the government’s controversial plans to reopen state schools in England for pupils in reception and Years 1 and 6 from June 1.

However, unions have slammed the plans by the Department for Education saying teachers, pupils and their families will be at risk of catching coronavirus.

An estimated quarter of primary pupils in England are in multi-academy trust (MAT) schools, which means the local authority have no control and they can set many of their own rules.

Piers Corbyn, brother of ex-Labour leader Jeremy Corbyn, was led away in handcuffs after showing up at Hyde Park with a megaphone and proclaiming 5G and the coronavirus pandemic were linked, calling it a “pack of lies to brainwash you and keep you in order”.

Around three dozen people have gathered in Hyde Park to protest against the coronavirus lockdown.

Standing close together near Speaker’s Corner, several held placards and banners including slogans like “freedom over fear” as police, including some on horseback, looked on.

David Samson, 50, who said he works in finance, told the PA news agency he came because “I never thought I’d see in my generation the suppressing of civil rights” over a “fake virus”.

There was a large round of boos when one protester was taken away in handcuffs by police.

The health ministry reported 1,547 new cases on Saturday, according to the state-run Qatar News Agency. That took the cumulative total to 30,972, according to the Reuters count. So far the country has recorded 14 deaths attributable to Covid-19.

11:33am update: Spain has reported lowest rise in Covid-19 deaths since mid-March

Spain’s overnight death toll from Covid-19 was 102 on Saturday, the health ministry has said, marking the country’s lowest 24-hour rise in eight weeks.

The country reported 9,200 new confirmed cases of coronavirus on Saturday, with 119 deaths over the last 24 hours. The latter figure is the highest daily figure of deaths the country has recorded so far.

10am update: NHS frontline workers are suffering from Covid-19 PTSD

Writing in his local newspaper, the Farnham Herald, the MP for South West Surrey said: “None of these changes will have the impact we need if one final change is not grasped by the nettle: to understand and deal with the extreme mental pressure that front-line staff in hospitals and care homes have been experiencing over the past few months.

“That needs to be addressed not just with practical measures such as adequate PPE, but also with enhanced mental-health support for those suffering from the Covid version of PTSD.

“We owe our brave front line staff no less.”

9:30am update: Head of the NHS said coronavirus admissions have halved since their peak

Sir Simon Stevens said hospitals in England were now seeing just over 9,000 people with the virus a day, and encouraged anyone suffering with other illnesses not to delay in seeking treatment.

At the peak of the outbreak, hospitals were treating around 19,000 people per day, but a lockdown now in its eighth week has seen numbers fall.

8:30am update: Public should ‘think’ before travelling as ’15m’ take to the road

People are being asked to “think carefully”  before visiting national parks and beaches on the first weekend since coronavirus lockdown measures were partially eased in England.

With the Met Office forecasting sunny conditions, members of the public are being urged to continue observing social-distancing rules and avoid potentially contributing to crowded public spaces.

An estimated 15 million leisure trips expected to be made by car in the UK this weekend, according to a RAC survey.

8am Update: Ministers and teachers’ unions have been told to “stop squabbling”

Ministers and teachers’ unions have been told to “stop squabbling” as Boris Johnson’s plan to get pupils back to school next month descended into chaos. Children’s commissioner Anne Longfield called for the two rowing sides to find a solution, warning it would be “extremely damaging” to keep children at home much longer.

The Government plans to reopen schools to pupils in Reception and Year 1 and Year 6 from June 1 at the earliest. But unionists insist the move would put teachers, children and parents at risk of becoming infected by coronavirus.