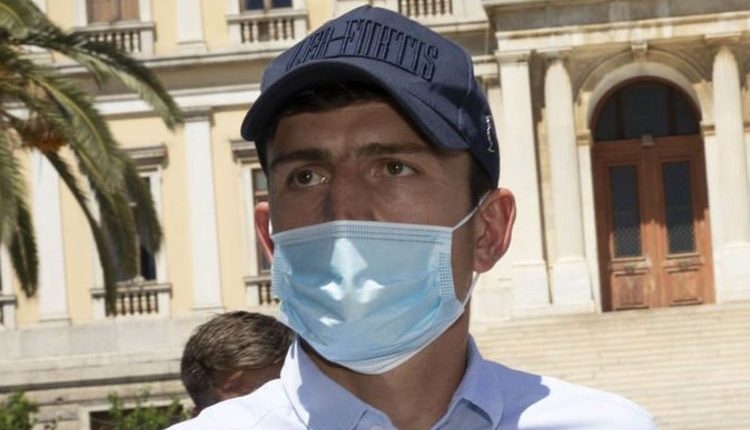 The England defender, 27, appeared in court amid claims that the brawl that led to his arrest started when his sister was stabbed in the arm. He was in court on the neighbouring island of Syros yesterday morning after being held in police custody there for two nights following his arrest for aggravated assault and verbal assault. Another charge of attempting to bribe a police officer was dropped.

A further court hearing is set for Tuesday but Maguire and two other men charged over the incident, aged 28 and 29, who have not been named, do not need to attend.

They are expected to cut their holiday short and return home.

The footballer refused to answer questions as he left the court and was bundled into a van by minders. However, his lawyer said the star was a free man “right now”.

Police spokesman Ioanna Rotziolou confirmed: “He is free to go back to England. He can be represented at Tuesday’s trial by an attorney.”

The Syros prosecutor’s office said on Friday that “three foreigners” had been arrested after an alleged altercation with police officers in Mykonos on Thursday.

Officers had tried to break up a brawl between two groups outside a bar when the three foreigners allegedly verbally abused and assaulted one officer.

The statement claimed that after arriving at Mykonos police station, the three men “strongly resisted, pushing and hitting three police officers” and that “one of the detainees tried to offer money so that the trial against them would not be completed”.

Maguire, who was on holiday in Greece, joined United from Leicester for £80million – a world record fee for a defender – a year ago. He denies the allegations against him.

Elsewhere, it was reported that Maguire was involved in a fight with rival fans after they taunted him and sang offensive songs.

His younger sister Daisy was said to have been stabbed in the arm with a “sharp object” during the ensuing brawl.

When police arrived, Maguire was reportedly “verbally abusive to an officer and then hit him”.

Witnesses in Mykonos said the trouble started in the Fabrika area, which is packed with bars and restaurants. They claim a group of drunken British men started baiting Maguire and made references to the 1958 Munich air disaster, when 23 United players died in a plane crash when returning from a match against Red Star Belgrade.

Holidaymaker Sam Moore claimed: “This group of British lads were out for trouble and were being really abusive towards Maguire and his club. I could hear them singing about the Munich air disaster and saying other vile things.

“I don’t know what football team they supported but they didn’t like Manchester United, that much was obvious.”

Three days before this incident, father-of-two Maguire was photographed drinking at a pool party at SantAnna Bar with fellow United stars Marcus Rashford, 22, and Brandon Williams, 19, as well as Love Island star Chris Hughes, 27, and snooker champ Judd Trump, 31. It is not clear if anybody at this party was with Maguire on the evening of the altercation.

Maguire, who earns £190,000 per week, is expected to return to Manchester this morning and is likely to face a dressing down from his club.

A holding statement from United yesterday said: “Following the appearance in court today we note the adjournment of the case to allow the legal team to consider the case file.

“Harry has pleaded not guilty to the charges. It would be inappropriate for the player or club to comment further while the legal process takes its course.”