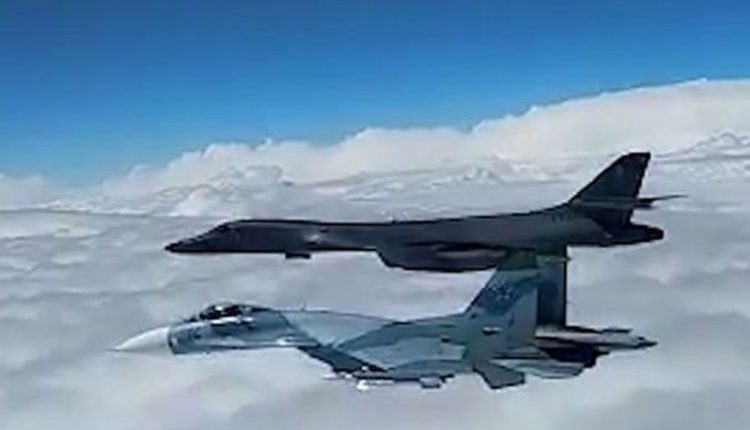 Russian jets were scrambled to intercept American nuclear bombers over the Black Sea, in the latest in a series of tense incidents between the two global powers. Footage from the Russian Ministry of Defence shows Russian SU-27 and SU-30 planes approach the two US B1-B Lancers “at a safe distance,” warning them to turn back. The incident comes just days after Russia’s SU-27 fighters came within feet of a US spy plane over the Mediterranean.

The Russian Ministry of Defence  said that the US Air Force’s “strategic bombers” were intercepted over neutral waters of the Black and Baltic Seas on Friday.

Following the high-altitude encounter, the American planes “changed the direction of flight from the state border” of Russia.

A spokesperson for the Russian Defense Ministry said the US planes were “promptly uncovered” and “the flights of Russian combat aircraft took place strictly in accordance with international rules for the use of airspace”.

The US military has yet to respond to the claims.

JUST IN: Putin FURY: Russia issues dire warning to US over coronavirus fight

The tense air force encounter comes just two days after two Russian fighter jets were accused of flying in “an unsafe and unprofessional manner” while intercepting a US spy plane over the Mediterranean Sea.

The US Navy said that SU-35 fighters swarmed around a P-8A US plane as it flew over the Mediterranean Sea on Tuesday.

The fighters “took close station of the spy plane” over a period of 65 minutes, according to the American officials.

A Navy statement at the time read: “While the Russian aircraft was operating in international airspace, this interaction was irresponsible.

Last week, President Donald Trump confirmed the US would pull out of the Open Skies Treaty that governs the unarmed overflights, originally set up to prevent conflict between the US and Russia.

President Trump said Russian violations had made it untenable for the US to stay in the treaty.

This week, US security officials also confirmed a major simulation exercise would soon see the US military practice fending off enemy bombers threatening the homeland.

Four US combatant commands and NORAD are set to come together for the first time for this exercise, during which fighters supported by aerial refueling tankers will protect US airspace from an approaching bomber.

How to Wear a Crop Top For Every Body Type

Kate Middleton news: How Duchess proved she was ‘strong enough not to be forced out’ | Royal | News