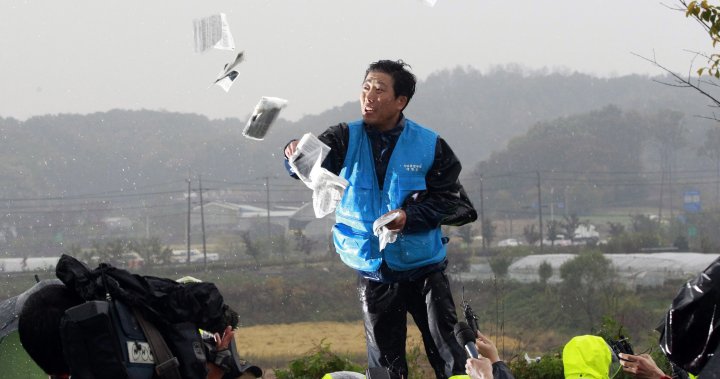 South Korea police on Friday raided the office of an activist whose anti-North Korea leafleting campaign has intensified tensions on the Korean Peninsula.

Police said officers visited the Seoul office of Park Sang-hak to confiscate leaflets, account books and other related materials. The Seoul Metropolitan Police Agency said that Park will be summoned soon for an investigation.

Park, a North Korean refugee who has launched balloons carrying propaganda leaflets toward North Korea for years, has been in the spotlight after North Korea abruptly used his campaign as a justification for a series of provocative steps against South Korea. Among them was blowing up an empty liaison office built by South Korea on the North’s territory.

Authorities in Gyeonggi province, which borders North Korea, requested a separate investigation of several activist groups, including Park’s, for alleged fraud, embezzlement and other charges over their donation activities.

Park said Monday that his leafleting was only aimed at informing North Korean residents of the truth about their government and that he would keep sending balloons to them.

The pressure on activists has led to criticism that the liberal government of President Moon Jae-in is sacrificing democratic principles to salvage its faltering efforts for reconciliation with North Korea. The governor of Gyeonggi province is affiliated with Moon’s ruling party.

A police agency official involved in the case said officers also raided the office of Park’s brother, Park Jung-oh, who has floated plastic bottles filled with rice toward North Korea across the sea boundary. The official, who requested anonymity because the investigation is ongoing, said police plan to summon Park Jung-oh too.

Voice of the Martyrs Korea, a Seoul-based Christian non-profit group, said in a statement Friday that it flew four balloons carrying an unspecified number of Bibles toward North Korea on Thursday. Seoul’s Unification Ministry expressed regret over the activities and said authorities have already been investigating the organization over its past balloon launches.

Earlier this week, Park Sang-hak said his organization covertly launched huge balloons carrying 500,000 leaflets toward North Korea, despite the repeated warnings from both Koreas not to do so. The South Korean government expressed regret over Park’s activities, but it wasn’t independently confirmed whether all his balloons reached North Korean territory. One was later found in South Korea.

Tensions between the Koreas temporarily eased on Wednesday, when North Korea announced it would put off steps to avenge the South Korean leafleting, such as sending its own anti-Seoul flyers, resuming military exercises and reestablishing guard posts at the border in violation of 2018 agreements to reduce tensions.

Some experts say North Korea’s saber rattling is aimed at extracting outside concessions in the face of crippling U.S.-led sanctions and the coronavirus pandemic.