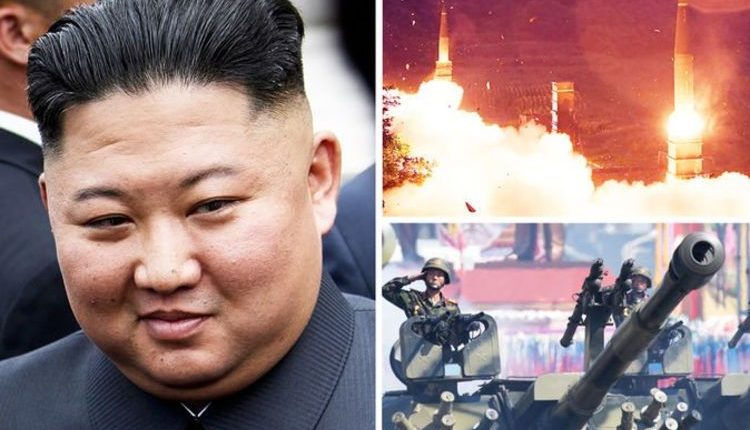 
Kim Jong-un took over the reins as ‘Supreme Leader’ of North Korea in 2011, after his father Kim Jong-il died of a heart attack. The dictator hit the headlines after he vanished twice for several weeks at a time over the last few months. Many speculated that he could have died during “botched” heart surgery and the claims were not disputed by the hermit state. His sister Kim Yo-jong was eyed-up as a potential success to Kim Jong-un until he re-emerged. During his nine-year reign he worked to develop the nation’s nuclear weapons programme – despite condemnation and threats from the West. Now it’s believed he has between 20 and 30 nuclear missiles within his arsenal and sufficient material to make up to 60 more. And although having the world-ending weapons at his disposal, North Korea expert Chris Mikul told Express.co.uk that he believes Kim Jong-un has no intention of firing them. He suspects there may lie an even more sinister motive for pursuing a nuclear stockpile.

Kim Jong-un is the third member of his family to rule North Korea, since the state’s inception in 1948 and was led by Kim Il-sung.

The current Kim is believed to be the “most liberal” of the nation’s leaders so far, which Chris Mikul claims could be because he was educated outside of the country.

The ‘Supreme Leader’ spent several years in Switzerland, where he made a few friends and developed a love for “video games” and “basketball”.

Mr Mikul told Express.co.uk: “He essentially became westernised, so you can see why there is a big difference between him and the other leaders of North Korea.

“To me there are a lot of signs that he is a more benevolent character and the reason is because he is different at heart… that said, he is still a brutal dictator.”

Mr Mikul, who penned ‘My Favourite Dictators’ last year, argued that Kim Jong-un could be seen as the nation’s most successful rule so far by North Koreans.

He added that “while no one likes to see the continued success of a brutal dictator” things could be a lot worse if he had died – as was believed in April and May.

Mr Mikul told Express.co.uk: “We know he has got nuclear weapons now, which makes him the most successful Kim because he has managed to attain a goal they were trying to achieve since the Sixties.

“The reason they want nuclear weapons is because they know that it’s an insurance policy that will keep the regime in power forever – and he’s done it.

“But in my opinion, he won’t pull the trigger because it would end up in the destruction of North Korea, so maybe it’s good for him to stay there now.”

As of March this year, North Korea had carried out 147 strategic missile tests since 1984 – under all three of its leaders.

JUST IN: North Korea: Why Kim Jong-un’s sister could be at risk of execution

Kim Jong-un has carried out 119 of those tests, the most of any of their rulers, and despite several failures was considered a major threat by the US.

John Hyten, the number two ranking official at the Pentagon, stated that the North Korean leader was assembling new missiles “as fast as anybody on the planet”.

He claimed that they were learning from their mistakes and trying to make advances in the missile programs – which he claimed could spell danger for the rest of the world.

Despite the threat perceived by the US Department of the Defence, Mr Mikul believes the weapons may be more symbolic and a way to secure their regime.

If Kim Jong-un was to die, he fears there would more risk from the hermit state due to “no clear successor” being named.

He believes – if it happened – that there could be a “fight at the top” among the inner circle, which in turn could collapse the regime.

Mr Mikul told Express.co.uk: “What could happen is that you would get hundreds of thousands of North Koreans fleeing the country, causing chaos in China, South Korea and Russia.

“So it’s probably better to have Kim Jong-un as leader, even though it is horrible to say – the economy is better under him than it has ever been or as good as it has ever been under the Kims.”

Chris Mikul’s book ‘My Favourite Dictators’ was published by Headpress in 2019, it is available here.