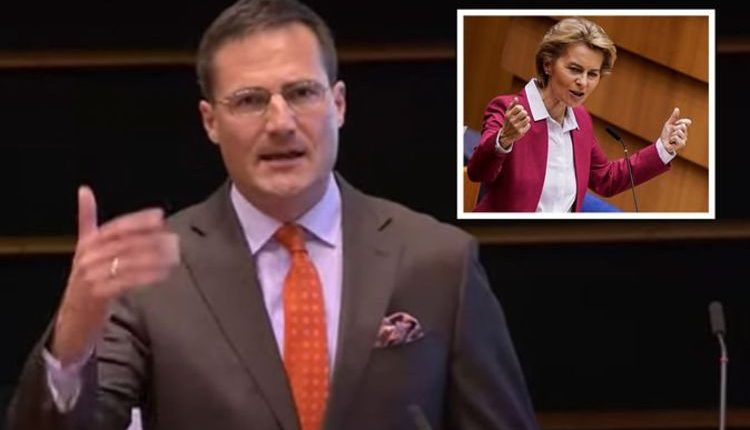 The EU bosses faced a backlash for striking a power-grab deal for Brussels “behind closed doors,” according to Hungarian MEP Márton Gyöngyösi. The criticism came after the European Union’s planned 750 billion-euro (£670bn) economic stimulus plan was unveiled this week by EU chief Ursula von der Leyen. She urged member states to “walk together” and back the immense coronavirus recovery fund for the bloc, which was supported by leaders in Germany and France.

The huge fund is designed to help badly-hit member states avoid an economic collapse after being shattered by the coronavirus pandemic.

However, Mr Gyöngyösi took issue with the fund, lashing out at the fact that it was agreed between Brussels officials “behind closed doors”.

He told fellow MEPs: “It is quite appalling that once again in such a critical time, the EU hammers out a deal behind closed doors.

“Everyone who criticizes the European Union for being not transparent is quite right.”

“I think if the EU wants to appear democratic, it better start acting like it.

“I can only hope that unlike the last Macron-Merkel deal back in June 2018 – about the fiscal union – that this deal will fare much better.

“That last one faded into thin air and we haven’t heard anything about it since its announcement.

“I can only hope that this package will deliver but I have concerns that this fund is not acting like a eurobond, and it will only add to the unbearable debt level of several member states.

The Hungarian leader told public radio in an interview on Friday that the EU stimulus package ignited “red lights in our heads”.

He added: “This new distribution system is an absurd and perverted solution, because it gives more to the rich than the poor, then what is the point of the whole exercise?

“Financing the rich from the coffers of the poor is not a good idea.”

Other countries, including the so-called Frugal Four, have also raised concerns about the huge rescue fund.

Fiscally conservative nations Austria, Denmark, the Netherlands and Sweden have all so far resisted demands to back the huge fund.