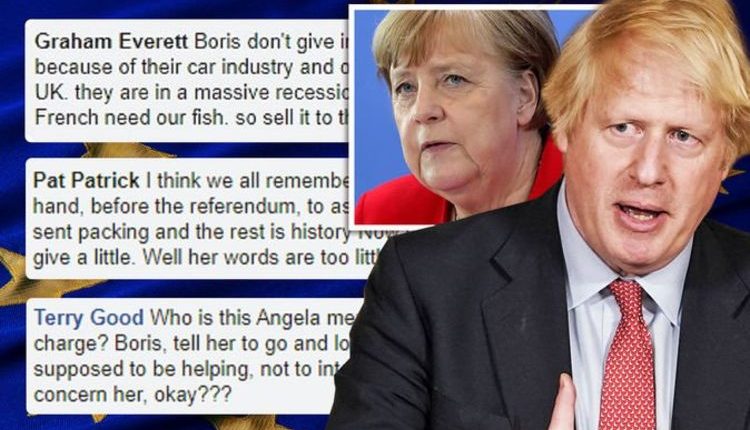 Mrs Merkel is urging EU negotiator Michel Barnier to play hardball by demanding “more realism” from the UK. Speaking today, Mrs Merkel’s ambassador in Brussels, Michael Clauss, said the German Chancellor was pushing for concessions from Mr Johnson to make it easier for her to convince fellow European Union leaders to back a compromise.

However, Facebook users posting on Express.co.uk’s page were unconvinced.

Bob Crowley commented: “The economy is pants at the moment.

“Now is the time to walk away, as it will only get better from there, WTO is the only way, ditch this corrupt bunch.”

He explained: “She is running scared!

“As it’s clear that Germany will have to pick-up the bill in future.”

“Also if she can’t get a deal then there are going to be other countries that will leave and her dream of a German Dominated Europe will be over.”

Similarly, Graham Everett urged: “Boris don’t give in. Germany is now panicking because of their car industry and other company’s that sell into the UK.

“They are in a massive recession. We have them on the run.

“The French need our fish so sell it to them at market rates.”

Speaking about the talks today, Mrs Merkel told the German Parliament: “Progress in talks is, to put it cautiously, very limited.

“We have agreed with Britain to speed up the talks in order to seal a deal in the autumn that must be ratified by the end of the year.”

However, she admitted Germany and the EU “must be prepared for the possibility that a deal doesn’t materialise”.

The UK negotiators have been in crunch meetings with their EU counterparts all week, after both sides agreed to intensify discussions.

They met this week face to face for the first time in months due to the ongoing coronavirus pandemic.